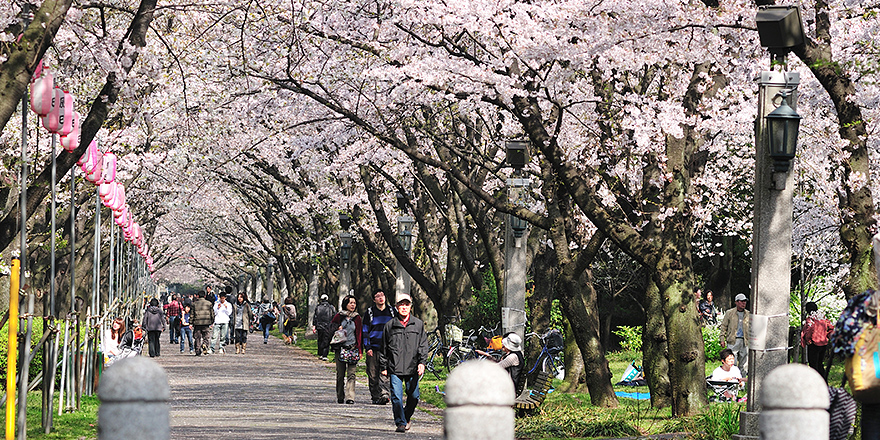 In the Tatsumi no Mori Green Park that opened in 1975, you can enjoy a diversity of seasonal charms along the alley lined with trees, mainly some 220 Somei-Yoshino cherry trees and other cherry species planted at its opening. (Somei-Yoshino trees number around 380 in the park as a whole.) In this page, let us feature, together with the history of the Tatsumi no Mori Green Park, trivia about cherry trees (a.k.a. sakura) and blossom viewings (a.k.a. hanami), hanami spots in the Tokyo waterfront area other than this park and our challenge of “Growing the Next-generation Cherry Trees” to pass on today’s alley of cherry trees to tomorrow.

The Alley of Cherry Trees at the Park 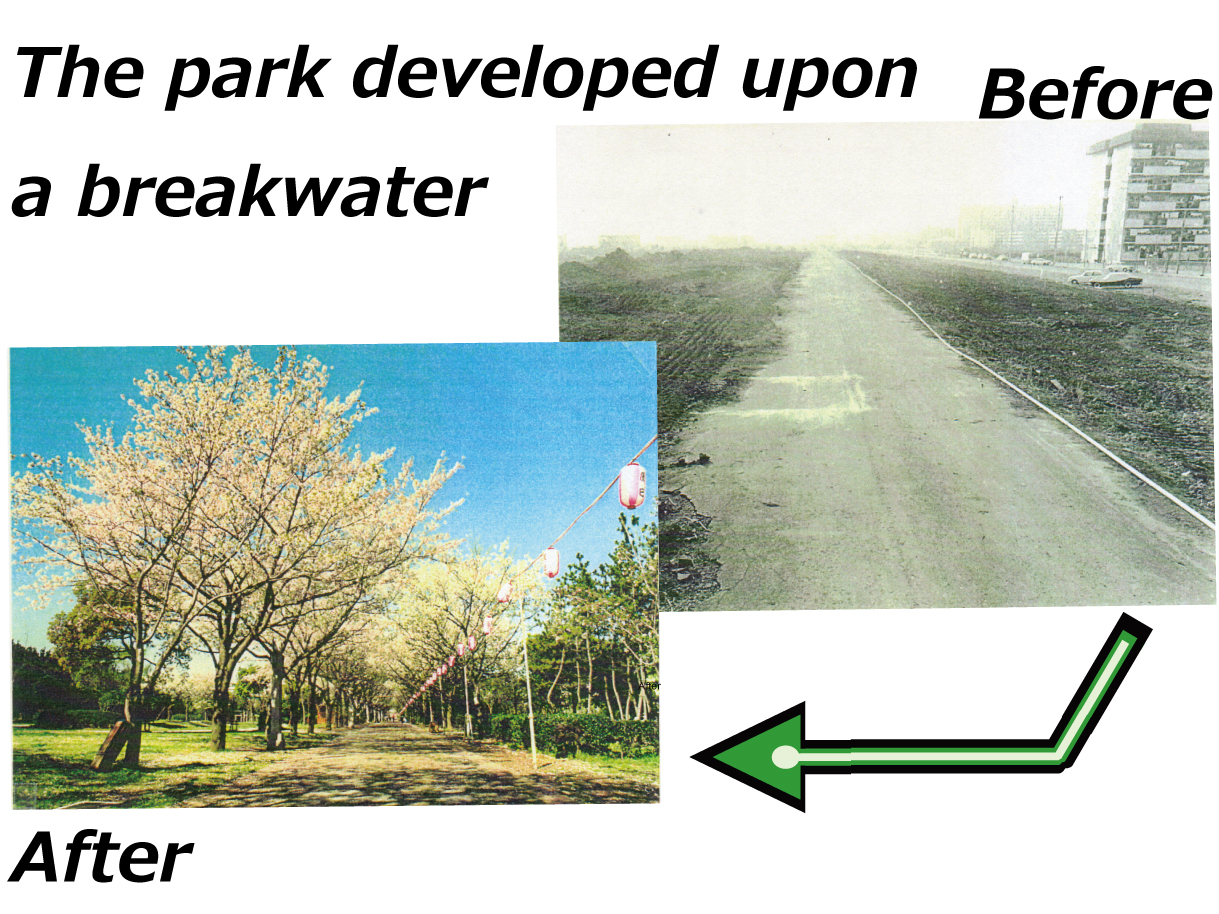 The cherry trees we see now along the alley were planted when the park was developed.
They were about 15 years old at that time, so are now nearly 60 years old as of 2019.
They were small in height when planted, and people could reach their branches by hand.
But they have grown tall enough as if swallowing the alley.
The picturesque landscape provided a hot locale for a number of well-known dramas, including the hit TV drama “HERO,” and many CM films. 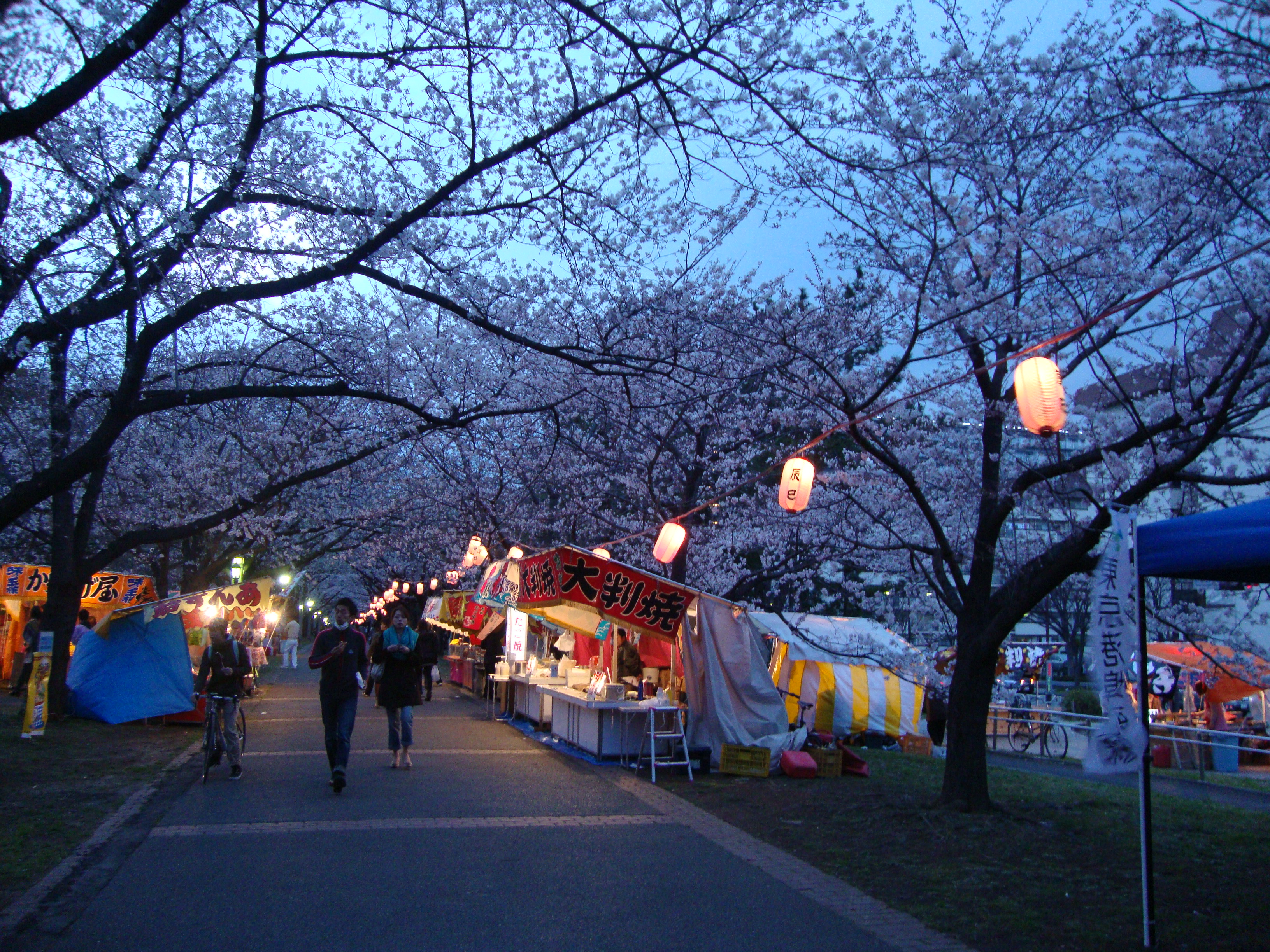 The alley lined by trees, mainly cheery trees including about 220 Somei-Yoshino, has long been loved as a blossom viewing spot by residents, attracting so many visitors every year.
With the cooperation of the local community and government, we Tokyo Port Terminal Corporation, the designated manager of this park, launched the “Tatsumi Sakura Festival” in the fiscal year 2011. The purpose of our initiative was to captivate more people to the park, creating a safe and comfortable environment for visitors.
During the festival from around late March to early April every year, the best time to enjoy cherry blossoms, lanterns and lights are installed along the alley to illuminate blossoms. Invited stalls nestle up there, catering to visitors. For sure, they boost the hanami mood.
The festival, the eighth in coming March, is now a popular traditional event for the season of cherry blossoms.

Varieties of Sakura and the History of Hanami 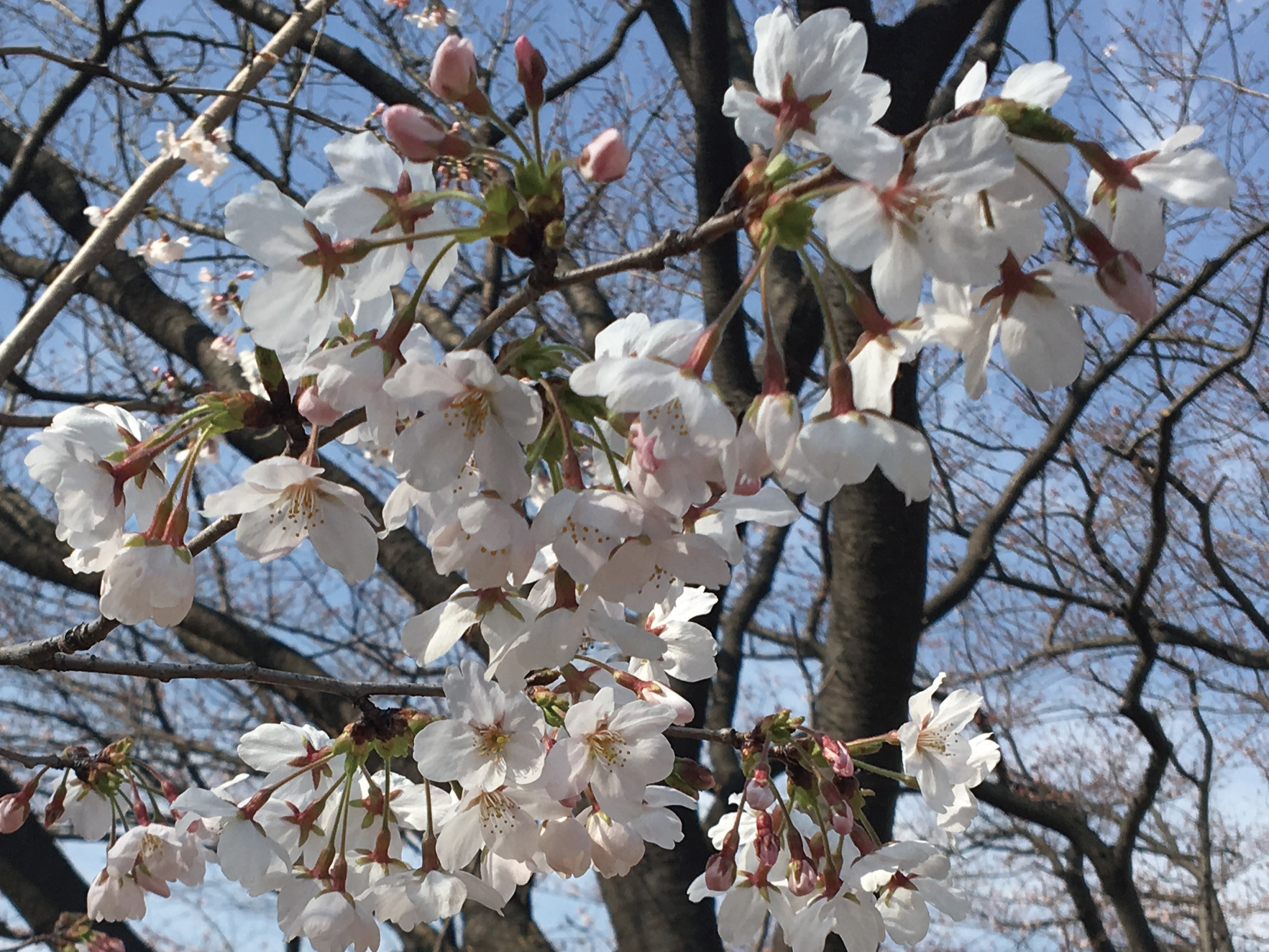 Over 100 cherry tree varieties grow in Japan, including nine elementary wild species.
More than 200 were horticulturally created from them.
In addition to Somei-Yoshino, there are in the Tatsumi no Mori Green Park Oshimazakura (Cerasus speciosa), Satozakura (Prunus serrulata) and Kasumizakura (Cerasus leveilleana).
Somei-Yoshino, renowned for its role as a gift from Japan to the United States capital of Washington D. C. early in the 20th century , is a species most popular and found in Japan. It is the index tree for the “cherry blossom flowering forecast.” 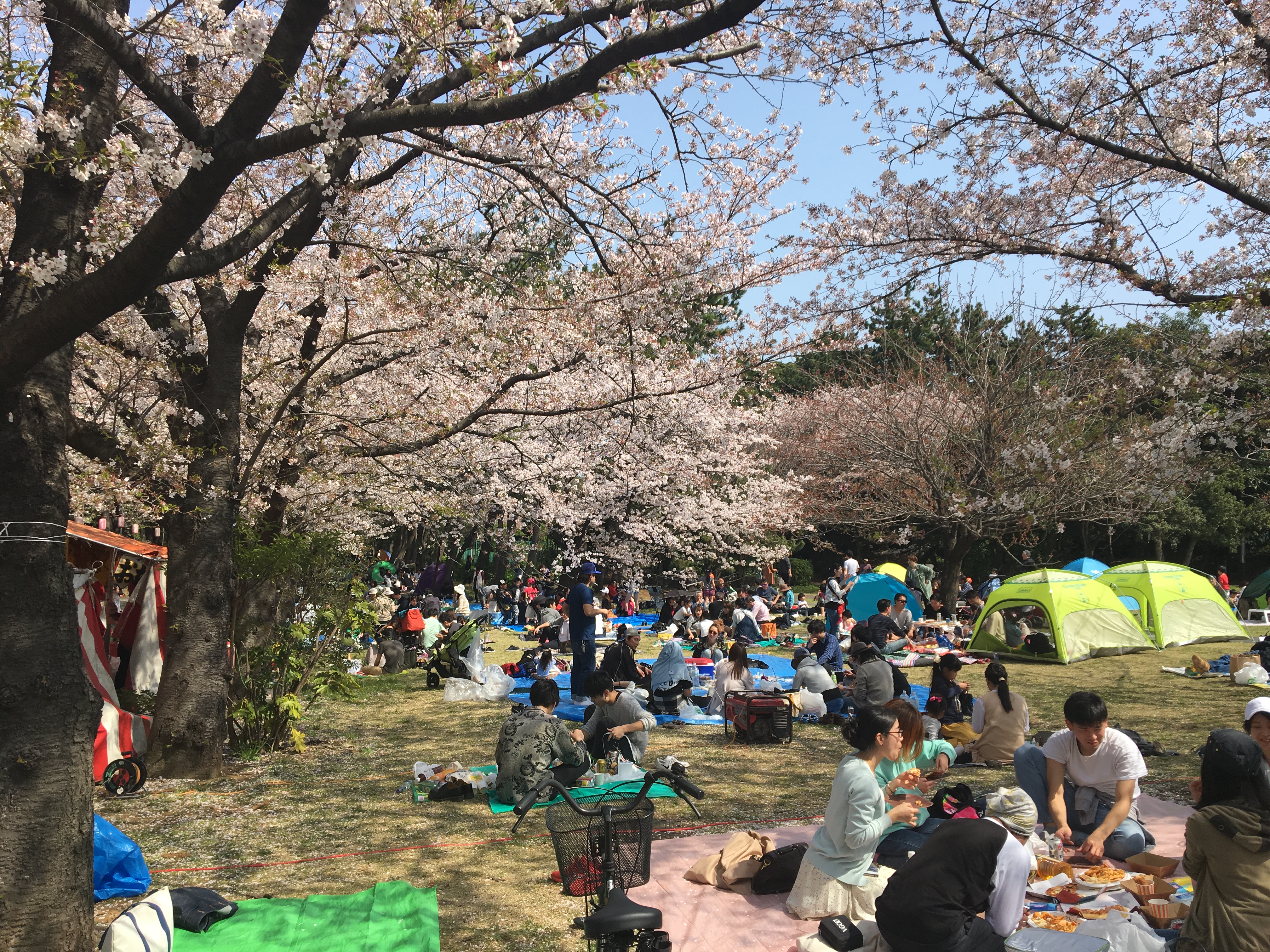 Hanami parties at the Tatsumi no Mori Green Park

It was in the Heian period (794-1185 ), they say, that people began to mean cherry blossoms when they spoke of blossom viewings.
Aristocrats of those days favored it as grace, but the aristocratic pastime gradually spread to ordinary people, growing to Japanese culture.
In the Edo period (1603-1867), a huge number of cherry trees were planted in various parts of Japan. In Edo (present Tokyo), a number of their viewing spots were born in Ueno, the riverside of the Sumida, etc.
By the by, do you know why there are so many popular blossom viewing spots along rivers? It is said to have been the intention of policymakers for embankment of those days. By attracting many people to blossom viewings, the ground of river banks would be strengthened, they expected.

Other Blossom Viewing Spots in the Waterfront Area

Other than the Tatsumi no Mori Green Park, you can find still more spots of blossom viewings in the marine and city parks in the Tokyo waterfront area.

In the Daiba Park, for instance, worth viewing is the Oshimazakura, a “healthy, supreme tree” designated by the Japan Tree Doctors Association! 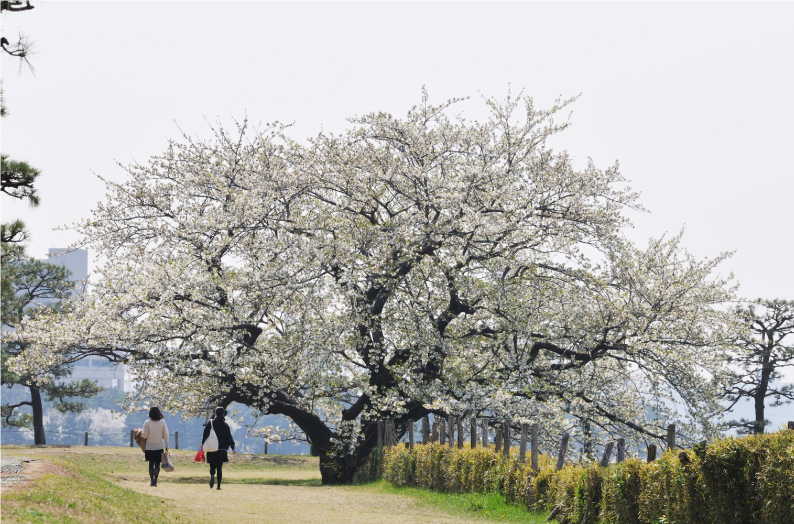 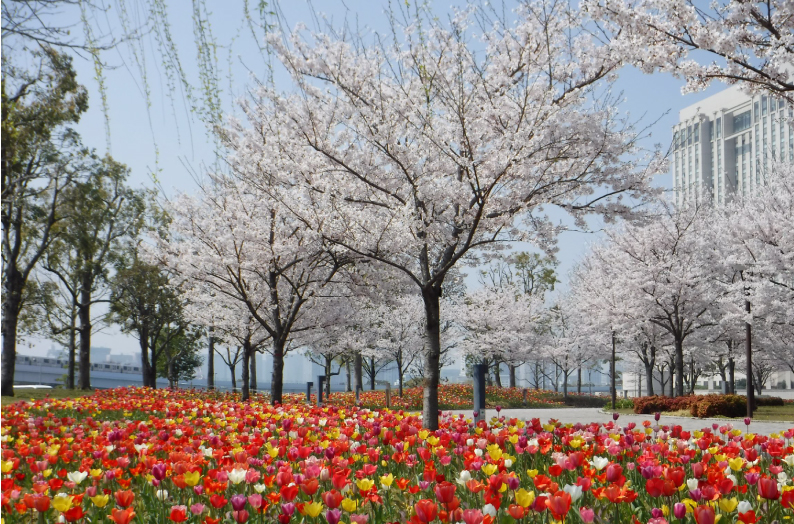 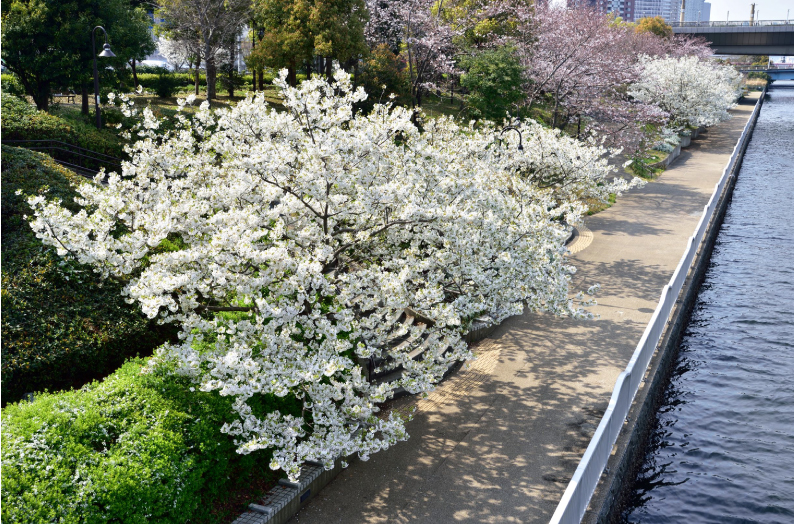 The l ifespan of Somei-Yoshino trees is regarded to be 70 years or so in general. However, we estimate that their lifespan in the Tatsumi no Mori Green Park is shorter since its soil is never optimal for them given the park’s origin. So they may be able to live only 60 years.
Accordingly, we, at our company, have been tackling a challenge of “Growing the next-generation Cherry Trees” to preserve the present beautiful alley lined with cherry trees, an invaluable asset for the local community.
Our efforts to pass it on to the future generation are as follows.

Challenge 1. ~Measuring Trees with a 3D Laser Scanner and Diagnosing them by Tree Doctors~

Not only cherry trees but all kinds of trees have grown taller in the Tatsumi no Mori Green Park that opened well more than 40 years ago.
We enjoy the present alley thanks to their growth. However, as a result of their big growth, they began to face a dense environment unfavorable to their living. They could not receive enough sunlight. Their branches bumped against each other.
To improve the situation and develop an environment in which trees can grow in health, we needed to check the configuration, number, height of trees in the park. We need to draw a plan to provide appropriate space for each tree by felling down excessive trees .
So we conducted their measurement with a three-dimensional laser scanner and grasped their accurate configuration in the park. We asked tree doctors to conduct a “physical check” for each cherry tree to select the ones to hand down to posterity.

Every time we work on new challenges, we will update this page.